“Here’s to women’s kisses and to whiskey, amber clear; not as sweet as a woman’s kiss but a darn sight more sincere!”

I woke up today with a bright light shining in my eyes.  Startled, I roused myself from the covers, expecting daylight, when it was the full moon instead peering in through my bedroom window, lighting the mountains aglow in her glory.  I laid there in the warmth of my bed for a while longer, and watched her travel across the heavens, until I realized it would make a beautiful picture.  I dragged myself from the bedchamber, donned a pair of flannel jammies, and grabbed my jacket, snowboots, and my camera and tripod to head outside before the mountains devoured the moon for another day.

At 7am, I stood outside wearing nothing but pajamas and a jacket, knee deep in snow in my front yard, and fought with my broken tripod to take some photos of the moon illuminating the skies.  Not wanting to consider my photo-a-day done by before sunrise, I loaded the pictures to my computer, and made pancakes instead.

Later in the day, we went for a photo-walk, and I snapped just some photos of the here and there, in the light of the sun (a precious commodity up north).  I’ve really struggled to provide just one photo for today, because I want to share several, and on most days, often do.

But today feels like a day for just one.

I took my camera out today while we were in town, with the intent on coming up with something to shoot for today’s photo. I…forgot to put my card back into my camera, so I borrowed Tim’s camera instead. He doesn’t have his card reader with him though, so there was no way I could get the photo off his computer.

So…I took a photo of it, instead.

For Christmas, Tim bought me a book called “Photo Idea Index: Things” by Jim Krause, which is a neat little portfolio of sorts, with literally, just photos of things inside of it.  I read the first chapter this morning during breakfast (gluten free, gingerbread pancakes, I’ll have you know) and I saw a panel of pinhole photos.  It got me curious, so Tim and I spent the morning figuring out how to turn my camera into a pinhole camera, without all the fuss of film and shoeboxes.  I think it turned out somewhat neat – I ended up taking thirty-something photos today, just around the house, and around town, and I’ve showcased the ones that worked out really well here.

Oh, and in case you’re curious, this is how to turn your dSLR into a pinhole camera.  Take your dust cover cap (that lovely bit that covers your camera sensor when you don’t have a lens attached) and a small drill bit.  Drill a hole in the centre, and make sure you tidy it up after – we wouldn’t want any pesky plastic pieces getting your sensor dirty when you attach it to your camera body.  Next, take some tinfoil and a bit of electrical tape, tape it to the inside cover of the dust cap, and use a pin to poke a hole through the middle of the tinfoil.  Attach to your camera, and voila!  It took some internet researching and a bit of experimentation before we realized that was the best way to do things.  At first, I (with the help of Tim) melted a pinhole directly into the dust cap, but it wasn’t perfect, and I ended up with a lot of shadowing on one side of my images.  The method with the tinfoil worked a lot better.

Note the black shadowing in the left hand corner for the next couple of photos, and the level of blurriness of them overall.

Canon Rebel XS. 6 sec, ISO 400.
yhe book that inspired the idea. this is the first photo I attempted to take that turned out, before we tried the tinfoil method.
such a dreamy photo.

Canon Rebel XS. 4 sec, ISO 400.
Cedric moved while I was testing out my depth of field. a bit of Lightroom post-processing turned it black and white.

Canon Rebel XS. 4 sec, ISO 400.
another Cedric photo – he looked away, and looked back.
eerie.

For this next photo, I tried to fix the shadowing that I was getting from the “melting pinhole” method.  I used the pin again, heated up until it was red over a candle flame, and tried to straighten the pinhole.  The initial problem was that the pinhole wasn’t 90 degrees to the cover cap, and the slight angle was making a shadow.  I…made it worse by trying to fix it.

Canon Rebel XS. 20 sec, ISO 400.
pinhole photography should just be called “dreamy and ethereal hipster photography” …I feel like this belongs on Instagram.

After making my photos significantly worse, we looked up the proper way to turn a dust cap into a pinhole lens.  All the photos that follow are done using tinfoil and electrical tape, taped over a hole made by a drill bit.

It seemed by this point of the afternoon, that the pinhole photography test was indeed a success, and it needed some full daylight experimentation.  (Read: we just wanted to go for a walk in the snow)

Canon Rebel XS. 1.3 sec, ISO 1600.
an attempt at a crop of a bigger photo – Tim still trying to find the pretty birdies.

(sorry for all the dust specks – turns out my camera sensor is really dirty!)

I’ve decided to do a fun little thing for Christmas this year.  I’ve taken a photo an hour (approximately) as a way to document my first Christmas in Canada away from my family.  We woke up at 7:00, and started opening gifts, and then we made breakfast and started prepping for the day.  For dinner, we headed over to my roommate’s parents house for a bit of a shindig.  With Turducken!

Canon Rebel XS. 1/100 sec, f / 8.0, ISO 400.
The moose was back this morning while we were trying to burn the last of the yule log, and she brought an offspring. I actually got this close to them! Poor hungry buggers.

I feel a bit bad.  I hate this project already.

Canon Rebel XS. 1/20 sec, f / 4.5, ISO 200.
In the vague attempts at coming up for a photo for today, I brought my camera to Schimmel’s today when we went out for coffees. Tim’s latte was more photogenic than my tea.

Canon Rebel XS. 1/125 sec, f / 8.0, ISO 800.
Apophyllite crystal with a flashlight shining behind it. I saw it sitting on my altar and got curious. Mostly, I thought the previous coffee shop photo was rubbish, and it was nearing the end of the day. Kinda turned out neat.

As Autumn moves into Winter, the snow falls gently from the skies, as though to remind me that today is the longest night of the year.  For centuries, people have celebrated this day, across civilizations, under names which are as differing as the tides.  Candlemas, Yule, Jul…the Winter Solstice.  Tonight is the Longest Night – when the Northern hemisphere is plunged into the darkest of depths, only to emerge at the dawn with something faint, yet tangible.  Hope.  Hope for a new solar cycle, and a hope for warmth in the coming days.  Represented by beginnings, I bring you this.

This blog.  I will still post in my regular travel blog during trips, over at paienne.blogspot.com, but here, here is something new.  I deleted Facebook at the beginning of 2012, and I’ve fallen out of touch.  I’ve become reclusive, and secretive, and I’ve stopped doing something I love – take photos.  So, I guess in a somewhat-related 365 project, I’m going to try and post a photo-a-day.  Some days, like today, I will post more than one photo.  Some days, I suspect I will struggle to post just one.  There may not always be commentary.  But then again, maybe there will be.  That’s the beauty about new projects – they’re so fresh and young, and they haven’t fully formed in the mind of their author!  As Winter turns into Spring, it is my hope, that so too will this little place to put my photo memoires …my photo memories.

Canon Rebel XS. 1/100 sec, f / 7.1, ISO 400.
The moose came back this morning. This little beauty has been eating my plants all year. I’m surprised she can find anything to sate her hunger, this late into the season.

Canon Rebel XS. 1/10 sec, f / 4.0, ISO 400.
And the stockings were hung, from the wall with tacks, in the hopes I could stop Santa, dead in his tracks. Cedric pounced from the tree, with nary a thought, as Old Saint Nick, dropped the presents he brought. He jumped and he thumped, that poor head of his, and he swore and he threatened to beat us with fish, which is precisely how Cedric got his Christmas wish.

Canon Rebel XS. 1/60 sec, f / 5.0, ISO 400.
The wreath on my ruby red door. I made it from cedar, hemlock, and pine boughs I collected myself, and constructed it from a metal hoop and some hot glue. And cranberries, of course! 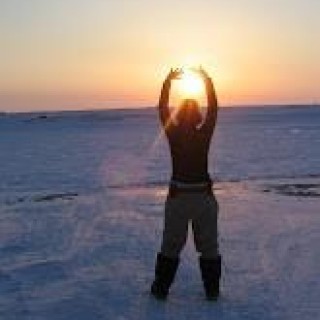 I'm not the greatest at this whole social media thing. I like face-to-face interactions. Phone calls, texts, random cups of tea. I work in some of Canada's most remote places, and I'm having a (not-so) secret love affair with my camera, who goes everywhere with me. When I'm not running away to the great outdoors, I like to read, play video games, and find the myriad ways I can annoy my cat. I'm the author and photographer at https://photomemoires.wordpress.com/ and I'm a contributor to Thalassa's Pagan Devotionals over at http://lectiodivinapaganus.wordpress.com/ Welcome to my world. Won't you sit down with a cup of tea and stay a while?